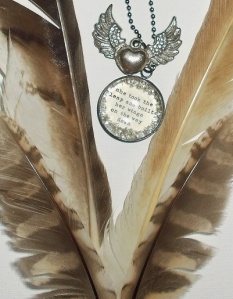 In last Friday’s post, I introduced my intention to write a “Word of the Week” column every Friday. As a word nerd, it just seems like the perfect way to usher in the weekend.

Since then, I began work on the second level of the life-altering writing course that I discussed in my very first blog post. I was BEYOND thrilled when I discovered that our very first writing assignment focused on – what else – birds! In fact, this was the exact prompt, “You are a bird. Briefly describe yourself. Then describe in great detail the flight from one tree to another one mile away.” With that, I was off and running. OK – flying.

In an attempt to honor my 2013 desire to share my writing, I’ve decided to take a leap of faith and to post the piece I wrote for my homework. Two days and 1,078 words later (give or take a few words, depending on which “word counting” program you use), I think it’s sufficient for public viewing.

I hope you’ll forgive me for momentarily diverting from my “Word of the Week” intent. By choosing the title of this blog post, I tried to reassure myself that I really hadn’t gone astray from that goal (and now you know what “Word of the Week: x 1,078” means).

I would GREATLY appreciate any and all feedback…..positive, negative, or neutral. I can only improve if I’m open to honest input. On that note, I take flight…..

Looking down from her daily perch on the 60-foot-tall power transmission lines that dissected the southern portion of the seventeen acre parcel, Yana saw the protected one begin her own circadian voyage around the perimeter. She was honored to have been her totem Red-Tailed Hawk for as many years as the protected one had resided on this piece of land.

Yana had been unaware that she had such a name until she heard it lovingly whispered on the wind one day as she circled in salute over the protected one. The wind not only explained that it meant “You Are Never Alone,” but that the protected one wanted her to know that she was aware of her presence and the blessed guardianship that she provided.

Yana’s Broad-Winged Hawk cousin had actually been responsible for uniting the protected one and her husband back in 1987 when they were studying the Buteo family in the Adirondack Mountains of New York. Now mated for life, as was Yana, they shared many other similarities.

They both stayed true to their voice, even when they were referred to as “screamers.” Stocky in build, but fast when they needed to be, they utilized their energy best by riding the wind and letting it carry them when their load simply seemed too heavy to bear alone. While they both adored their red attire, Yana looked far more fetching in hers. Both also seemed to spend an inordinate amount of time searching for food – one out of need, the other out of greed.

Sadly, the protected one was rooted to the earth and had not been blessed with hawk-eyesight. It was therefore Yana’s job to soar into the heavens and to relay the messages and visions she received to the protected one. It was that insight that gave wings to the earthbound one and – for that – they were both eternally grateful.

The day had finally come though for Yana to pass the totem torch to one of her own young. She had been blessed to witness the arrival of thirteen winters, but it would soon be her time to soar into the depths of the heavens she had only been allowed to skim the surface of for so many years. Serena, her winged daughter, would now be the caretaker of the human.

Yana timed the lift-off from her perch to allow her to effortlessly dip her wings in a final feathery bow to the flightless one she had come to love. The featherless wave of acknowledgement that came from below was all Yana needed to begin her last turn towards the west with a full heart.

As her life was now at a juncture with death, it seemed only fitting that Yana’s final flight would begin at the intersection of Catatonk Creek – once called Tiatachschiunge by the Onondaga Indian Nation – and Sulphur Spring Creek. The breeze arched her smoothly through the S-curve of the historic Tiatachschiunge and her feathers remained unruffled as she coasted along the straight section that ran parallel to Candor Road.

Also known by the the locals as Route 96, this stretch of road lies close to the stream and is often littered with the carcasses of critters that have been impaled by cars going at least 55 miles per hour. Yana had found many a meal during lean times when she scoured that paved hunting ground. An occasional fish feast of white suckers could also be found there, as lazy fishermen and women tossed their filleting efforts alongside the folding chairs from where they had cast their lines. The humans always kept the stocked brown trout to fill their own gizzards.

Continuing west, Yana simply coasted along with the wind that rose from the creek bed. The creek itself varied in depth from a mere few inches, to one section that was rumored by the resident Hooded Mergansers to be twenty feet deep. No hawk dared to verify that information. What they did know was that the creek ranged in width from only a few feet where deer were known to cross easily, to around thirty feet where even humans needed a boat to safely make the shore-to-shore journey.

The lay of the land around the creek had changed severely after Tropical Storm Lee left a river of tears coursing through the area back in September of 2011. Gravel and tree debris coalesced into walls where there had never been any before. Beaver were now taking advantage of the work that Mother Nature had done for them; they were busy from sunrise to sunset shoring up areas that they once found unsuitable.

Yana was never certain which tree species the beaver preferred, but she knew the creek was lined with red maples, willow, multiflora rose, sumac, and ash. She and her mate had been fortunate to find the lone birch tree in the area to weave their home and to raise their many broods.

As there were less than a couple of dozen human homes that had grown their own roots along the creek, Yana’s flight filtered her through the hilly and mostly uninhabited woodlands to both the north and the south. She would miss the days when she soared high above the quiet land to gather the precious messages that she would then pass along to her protected one in the form of molted message-laden feathers.

In leftover memories from a previous life, Yana knew that the patchwork quilt of land below her had been made of earth-tone colors and had been stitched together by fence posts, power lines, telephone poles, meandering roads, and evergreens that abutted various shades of manicured field “fat squares.” The streams were merely appliquéd details. The earthen ponds threadbare spots where cooled lava tears congealed. Human habitations fancy baubles attached to the quilt with their cement and wooden threads.

Before she began her descent into the patch of land she had called her own for thirteen years, Yana soared one final time towards the heaven she would soon gain entrance to. From up high, she couldn’t help but notice that the surrounding creek beds she had flown hundreds of thousands of times looked like an ancient hand of glacial fingers that had long ago left its palm-print on the earth. It comforted her to think that it would still be there for decades to come – or at least long enough to guide her beloved daughter Serena as she too soared heavenward, gathering her own precious messages along the way.