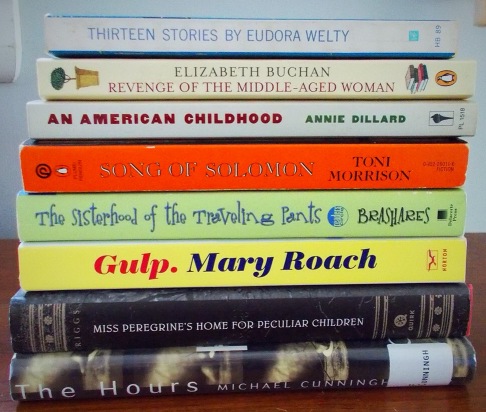 It’s official. I’m in need of a book-buying intervention. I’ve read seven more books since posting my last review, but, last week, Tim and I went to a sale at the tiny library in Berkshire, New York where I bought the eight books shown above. Tomorrow, there’s another sale being held at the Owego library and they ALWAYS have good stuff. Oh well. Everyone has a vice and books are obviously mine. What I don’t spend on booze, cigarettes, shoes, clothes, etc. I happily put towards filling my bookshelves. And yes…I’m aware that I’m living in denial about them already being full, so perhaps an intervention won’t have much impact on controlling my obsession. Save your strength my dear friends.

In order to both catch up and to practice being succinct with my book reviews, I’ve posted my “star ratings” in the photo below, along with shorter-than-normal blurbs for each. The list contains three novels, two collections of short stories, and two non-fiction books. I hope you find something of interest to you. 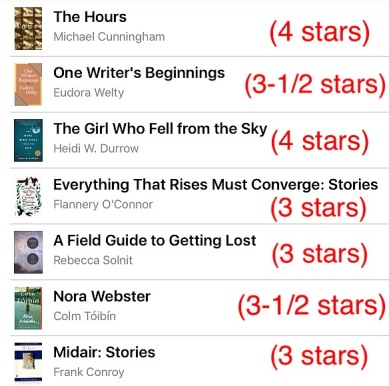 “The Hours” by Michael Cunningham (Pulitzer Prize Winner for Fiction, 1999) – I didn’t find the writing to be anything spectacular, but I enjoyed the unique way the author linked the three main characters, one of them being Virginia Woolf, the famous writer. Unfortunately, that connection never became clear until page 203 (and the book was only 226 pages long!). I wonder how many people quit reading before they ever reached that critical point. Maybe I missed some clues along the way, but I’m not willing to read it again to see if I did. I gave it four stars, but it’s a borderline three-and-a-halfer.

“One Writer’s Beginnings” by Eudora Welty (1984) – An autobiography written by the Pulitzer Prize Winner. As the dust jacket indicated, “she tells us how her family and her surroundings contributed to the shaping not only of her personality but of her writing.” It’s a little light on details, but it’s a nice read nonetheless. Good enough that I quickly snatched up her short story collection, “Thirteen Stories,” when I saw it at last week’s book sale.

“The Girl Who Fell from the Sky” by Heidi Durrow (Carnegie Medal winner, 2011)– Based on a true story that was interwoven with the author’s imagined story about the daughter of a Danish woman and a black American soldier and the challenges she faces growing up in Portland, Oregon during the 1980’s. Chapters are told from the rotating viewpoint of one of the main characters, a technique that I like as both a reader and as a writer. The ending left we wanting MUCH more though. Hopefully Durrow has a sequel in mind.

“Everything That Rises Must Converge: Stories” by Flannery O’Connor (National Book Award Finalist for Fiction, 1966) – I’ve heard so much about this author – both good and not so good. This was my first encounter with her work and it’s probably going to be my last. Maybe it’s just this specific book (which was the one O’Connor was working on at the time of her death), but I quickly grew weary of the repetitive focus on children who had great disdain for their parents (which was usually just the mother as she was the only one left alive) and parents who outrightly disliked their children. The constant pejorative references to “Negroes” also made me very, VERY uncomfortable. I also found it interesting that an artist such as O’Connor also consistently portrayed creative people as lazy and/or crazy. Perhaps her writing is indicative of the era and environment that she lived in, but she’s just not my cup of southern tea.

“A Field Guide to Getting Lost” by Rebecca Solnit (2005) – I enjoyed Solnit’s “The Faraway Nearby” so much that I was willing to wait more than a year to borrow this book through interlibrary loan. (The first time I requested it, it got lost in the mail between the two libraries; the coincidence of that occurrence and the title was NOT lost on me). Unfortunately, it wasn’t worth the wait. It had its good moments, but not enough of them. Every other chapter was entitled “The Blue of Distance,” but that writing technique didn’t add to the flow of the book; in fact, it seemed to make it even more rambling. Granted, there were various themes such as music (punk, country) and location (desert, city) interwoven throughout the book, but the word that best summarizes this book for me is “disjointed.” I’m guessing that’s probably not the version of “lost” Solnit was hoping to convey.

“Nora Webster” by Colm Tóibín (Washington Post Book of the Year for 2014, New York Times Notable Book, and numerous other lists) – Having enjoyed Tóibín’s unique interpretation of the relationship between Jesus and his grieving mother in “The Testament of Mary,” I really wanted to like this book. Unfortunately, I didn’t. Nora, the main character, was accurately described on the rear book cover as “selfish…and blind to the suffering of her young sons (and daughters too, I might add), who have lost their father.” Within that same description, she supposedly also “has moments of stunning insight and empathy,” but I must have missed those. In the end, I simply grew to dislike her more and more as the story continued. That wasn’t the only problem with the book though. There was a level of vagueness surrounding the overall story that left me wanting and wondering. After having waded through 400 pages, I still didn’t feel like I knew much (if anything) about Nora’s mother and father, even though they obviously played a role in how she approached raising her own children. I never understood why she didn’t get along with her sisters, nor why Nora supposedly got along so poorly with her mother. Nora’s deceased husband, Maurice, is such a vague character, that he feels like a ghost in more ways than one. Even the sense of a time frame in the book came across as vague. As a writer, I know we’re supposed to “show, don’t tell” and to not insult the reader by providing too much information. It’s a fine line though and, in this book, it felt like the mark was often missed. (Fair warning for anyone contemplating reading “The Testament of Mary” – as a Goodreads’ reviewer said, “Both the Disciples and Jesus do not come off well in this telling by Jesus’ grieving mother. If that bothers you, don’t read this book.” I would agree with that pronouncement.)

“Midair: Stories” by Frank Conroy (1985) – A short story collection, all told from a male perspective. The first two stories (“Midair” and “Celestial Events”) really grabbed my attention. Unfortunately, two of the stories (both that were written in a letter format) left me confused and “Roses” actually managed to leave me feeling somewhat angry. The three remaining stories were “flat” and nothing that moved me. Not an author I’d heard of before and not one that I’ll likely read again.

4 Comments to “Seven Down…Eight More Added To The Pile”